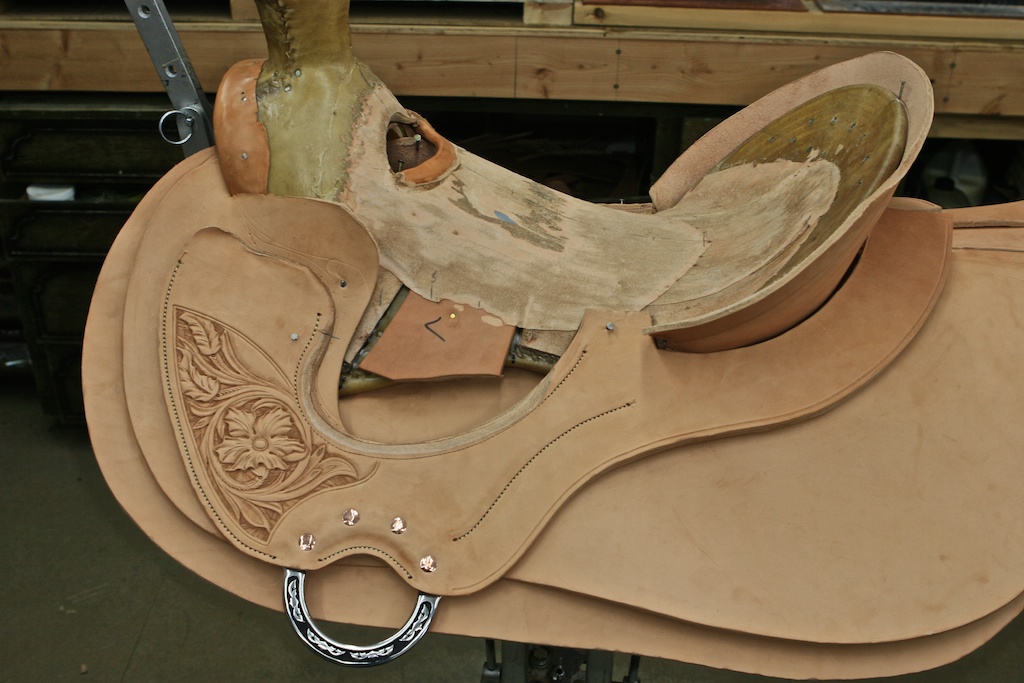 I’ve been very interested in the saddles made in California during the 1800’s. Makers such as Visalia, Garcia, Loomis, and others from that period made some beautiful as well as very functional saddles for Vaqueros who worked in the large cattle industry from California to Canada. Most of my saddle orders are for saddles built on Wade trees. I wanted to do something a little different and more in the tradition of these historical California makers. I started with a 3B tree. I had a small wood post horn built on the tree along with a 5″ x 12″ cantle. I am using a saddle built in the 1880’s by Sherman Loomis out of Santa Barbara, CA, as my model for this project. When I saw this saddle it was different than anything I had seen to date and looked like an interesting concept.

In this first post on this project I will take you thru the beginning stages of this saddle. Other posts will follow showing the progression to a finished product. This first photo shows the tree and the layers of leather being shaped into the ground seat. I am experimenting with the ground seat on this saddle as it will be a saddle that I will be riding personally. I want something in this seat that will promote a more forward riding position. In this next photo we see the process of cutting the leather for the skirts, cantle back, and rigging. This saddle will be single rigged at somewhere between 5/8 and 3/4 position with a flat plate rigging. The skirts will be composed of two large pieces, the bottom portion of the skirt with lies under the saddle tree and the overlay. The saddle tree will be sandwiched between these two large skirt components. In this photo I am placing the parts together and sorting out the final flow of lines in the overall design. We are looking for something that is not only functional but aesthetically pleasing as well. This is always an interesting aspect of custom saddle design and can vary quite a bit from saddle to saddle depending on the saddle tree as well as the rider. This part of the process sometimes takes a long time as I need to leave it, come back later and see if it still appeals to me. There are occasions when I may take several days to make a final decision as what looked good on Monday may not look as good on Tuesday. Even though I spend a fair amount of time drawing out on paper what I would like, it always looks a little different when you start putting leather on the tree. Again, I am using the S. Loomis saddle for my model so I am taking that saddle into high consideration as I design the flow of the skirts and the rigging. A unique aspect to this rigging is the back portion. It is very common for a flat plate rigging to wrap around the back of the cantle. However, in this design the wrap around is going to be exposed rather than covered by a set of rear jockeys. In the following photo I have finalized my rigging design and have carved the front portion, riveted the rigging ring, and sewn the front and back portions of the rigging together.